Just got back from the world's largest annual gathering of twins in Twinsburg, OH. 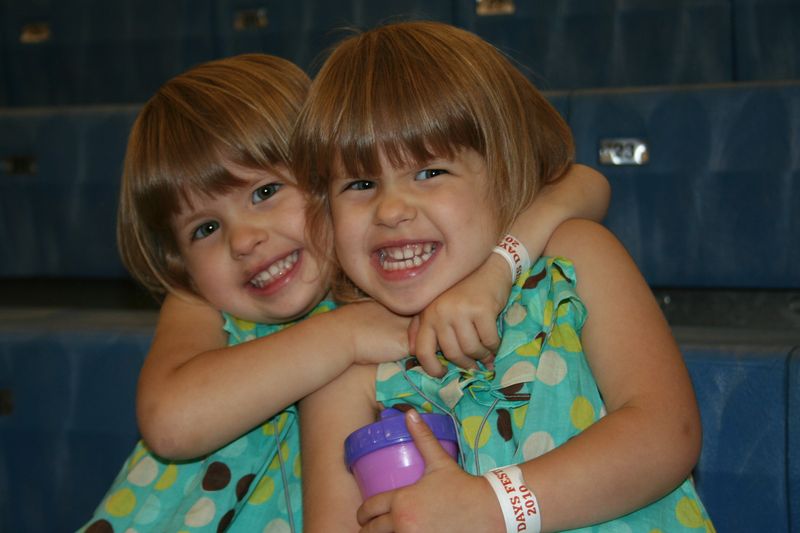 I'll be covering the story for American Way and spent one of the days walking around with a photographer interviewing a bunch of identical twins including Marlene and Darlene, Floyd and Lloyd, and Ned and Fred. Indeed.

When I first stepped foot on the festival grounds and saw boys and girls, men and women dressed alike, my stomach dropped and I felt uneasy. It played off my secret worry that my girls would end up...weird. Different. Dependent on one another in a way that exposed a weakness. I worried that they would end up unable to stand on their own. That they would always need the other too much.

I walked into this weekend with trepidation and, admittedly, a slightly negative attitude. 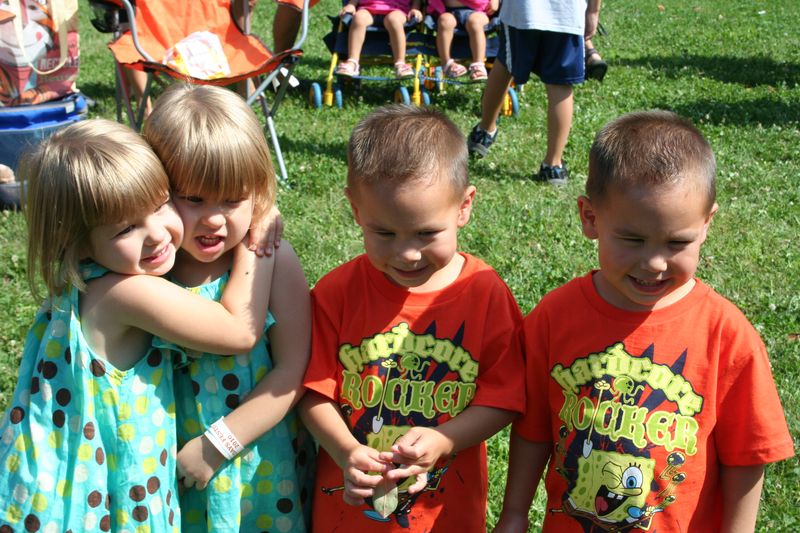 But then my girls started hugging each other a little more. They had smiles on their faces, and when I looked around I saw that everyone else had smiles on their faces too. When I first spoke with one of the organizers of the festival, she told me this was a chance to celebrate multiple birth. That fell on deaf ears; after all, parenting twins has left Jim and I with some fairly significant (and fresh) wounds. Three years in, we're still exhausted and stressed and running on fumes.

We live a life at both extremes. This is the most gorgeous, full life I could have ever wished for, and sometimes I wish it would all go away. 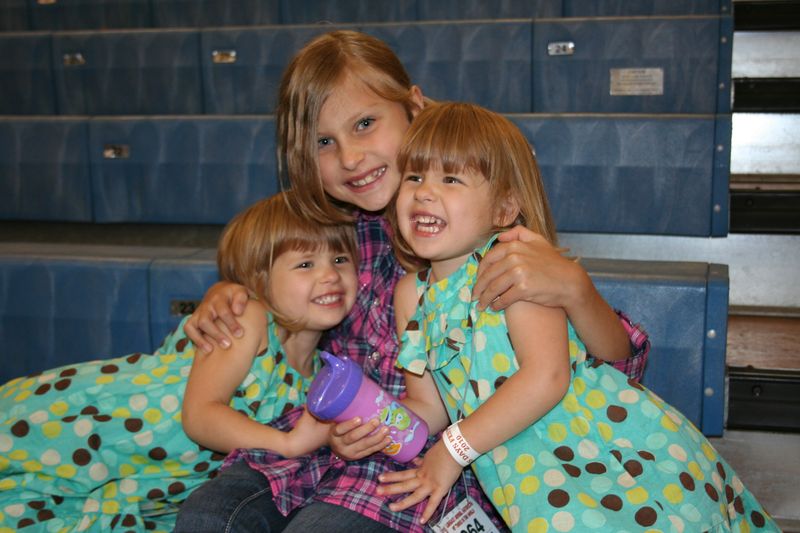 It is hard to admit that weakness as a parent. Sometimes it can become overwhelming or these short, demanding people can so easily make me cry. This happens to all parents, of course, but for parents of multiples it rises to such a different level. I was able to meet a wonderful fellow mom of multiples (a blogger that I follow) on Friday. Talking to her was like taking a deep breath of fresh air. It filled me up and made me feel normal. We laughed at the chaos--I told her I had to use my rape whistle to get their attention sometimes, she told me she considered getting an air horn--and it felt good to find someone who understood. And the great thing was that I could see that she, too, lived on that high wire between the two extremes: she was filled with a passionate love for her little boys and girls but given the chance to flee alone to Tahiti? I bet she would have strongly considered it.

And I would have folded myself into her suitcase.

By the end of our visit, I could see that what I feared for my girls might very well come true. They may speak in stereo. They may marry brothers and live across the street from one another. They may, without fail, choose each other over everyone else in the world. 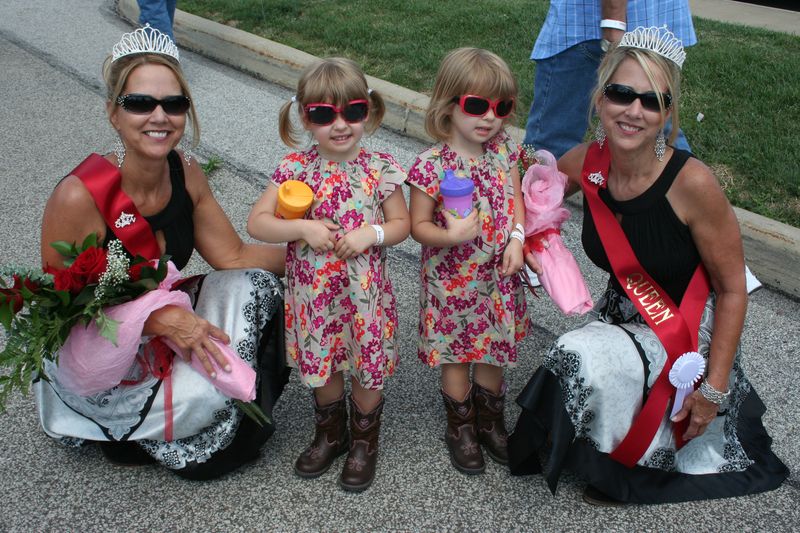 What I learned this weekend, is that I'm okay with that. My girls may share a twisted strand of chromosomes, but they have already shown their strong and divergent personalities. So just as I sit in the middle of two extremes, my emotions soaring high and falling low, so do my girls stand on a thin line dividing what they share and what they don't.

It is hard for me to live in a place where everything is gray and fuzzy. Everything is at once this and then that. It was an enormous and emotional event for me to talk to these men and women and try to catch even a glimpse of their experience. And as I watched a set of teenage girls with bright blond hair matching their bright pink dresses (which naturally matched each other's), quickly, and seemingly unknowingly, weave their fingers together as they walked past funnel cake stands and souvenir tents, I felt such comfort.

My girls have been given the gift of one another, and that is truly something to celebrate. 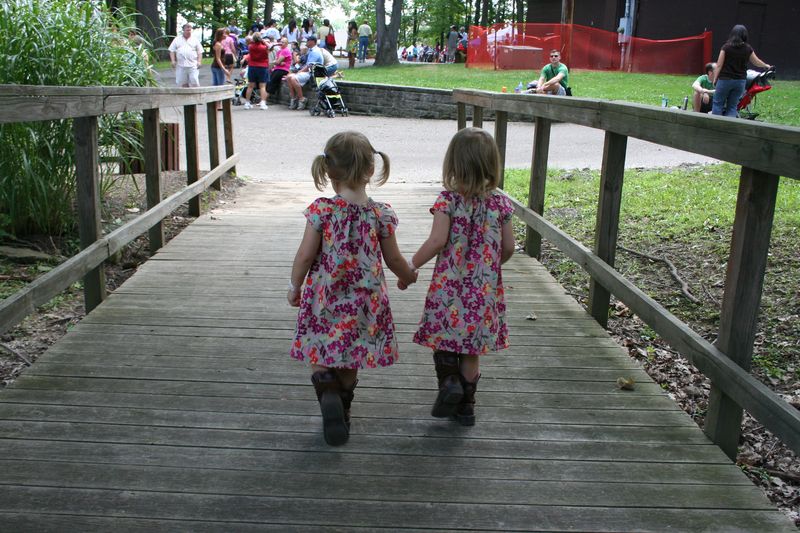 Wonderful words and pictures. Look forward to reading your article.

Thanks guys. I'm uber-nervous about the article. I'll be so glad when it is done! And wait until you see the photograph the professional photog took of the girls. AMAZING. Watch out Olsen twins.

Thanks for sharing! I'm debating taking our girls at some point for the same reasons you felt weird at the start. My girls aren't identical though, are most that attend identical?

Most that attend are identical, but it was fun to see the fraternal twins too. I particularly loved the b/g teens. One pair wore a shirt that said, "No, we're not dating. We're twins."

I have to say, it did open my mind. And my girls really felt something. It is worth the trip.

The comments to this entry are closed.